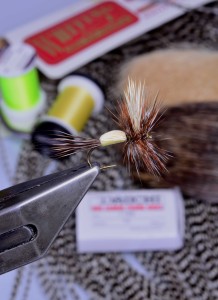 In Tying Dry Flies, Randall Kaufmann notes that the Humpy is “arguably, the greatest surface fly ever devised. It represents nothing and everything … depending on its construction, the Humpy can represent caddisflies, stoneflies, mayflies, midges and terrestrials.”

But the Humpy also has another reputation: as a difficult, frustrating pattern, a fly you ask your friends to tie if you want to see them struggle. And over the years tiers have come up with various ways to avoid the problem of building a body, overbody and wing of one clump of deer or elk hair.

So: perfectly fine reasons to see if we can tame the Humpy! And the added bonus is this: master the Humpy and you’ll learn a lot about material, sizing and tying technique.

A word on materials: choose elk or deer hair that does not flare too much. Early season or summer hair is a great choice. For thread: you’ll need to tie quite a bit of material on to a hook. For that reason many folks choose 6/0 thread. My advice: go thinner. A thin but strong thread such as Veevus 14/0 or Textreme 8/0 bites into material much better than a thicker thread, which helps you make fewer and much more effective wraps! 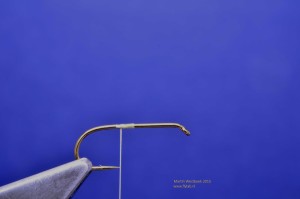 Start the thread at the halfway point. This point is important because it is the reference for the start of the body and front of the hump, later on. Tie in your tail, length should be the length of the hook shank*. Start with very tight wraps and decrease thread tension to firm wraps to avoid flaring. Keep the tail on top of the hook shank. Return to the halfway point. 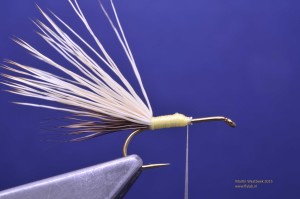 This is the critical step. Get this one right and you’ll have an easy ride; get it wrong and you’re in for a fight ;-).

Clip a bunch of deer or elk hair from the skin. Carefully remove all short hairs and all underfur from the hair. Any short hairs remaining will stick up at places you don’t want; any underfur makes it impossible to stack your hair properly. Don’t use an overly big bunch of hair. If this is your first Humpy it’s ok to count the hairs: 30 hairs will give you enough volume for a nice hump and two visible wings. I know, counting hairs sounds more than a bit OCD but do it once and it will give you an idea of the volume of hair you like to work with.

Tie in the hair at the halfway point. Wrap from tight to firm as you progress. Carefully place your wraps next to each other to make a level body. Pull the hair slightly upwards when wrapping: that helps keeping them on top of the hook. Advance thread to the last wrap that secures the tail and make one extra, tight wrap. This extra wrap ensures that there will be no thread showing between the end of the hump and the start of the tail. Take the thread back to the halfway point. 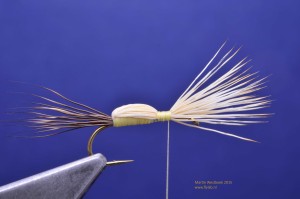 Pull the hair forward to make the hump and wrap down with three tight wraps. Again, pull the hair slightly upwards while you wrap to keep it on top of the hook. Lift the hair and make one or two anchoring wraps around the hook shank only, and continue wrapping the hair until you reach the point where the wing should start. About halfway between the hump and the hook eye. Divide the wing by a figure-of-eight wrap. 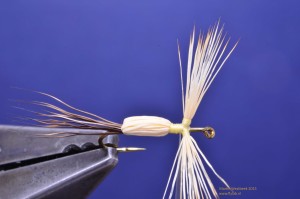 Take your thread over the hook (not under the hook or the far wing may be pulled forward) and repeat with the near wing. Post the wing by placing three wraps right in front of the hair. Tie in the hackles, dull side facing forward. Make sure that you have a little bit of stripped quill exposed. That will give you a clean start of the hackle. Start with the second hackle you’ve tied in: make three wraps behind and three wraps in front of the wing and tie down. 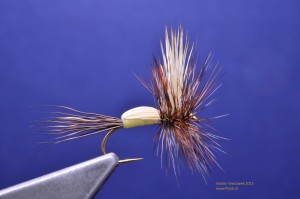 Wrap the other hackle, three wraps behind and three in front of the wing and tie off.

Looks good? Congrats! You’ve tamed the Humpy! Take a beer and tie a dozen to fine-tune and help your fingers memorize this great pattern! 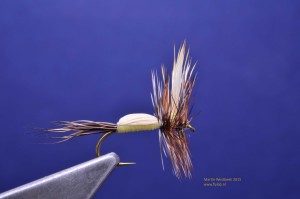 * I don’t like Humpies with short, stubby tails so I tend to err on the side of caution. If your tail is a little longer, that’s no prob. Just compensate for that extra tail length by shortening in step 3 the hair for the body/wing a bit.