The Paraloop hackling technique has been described in great detail in Moutter’s book ‘Tying Flies the Paraloop Way’ (2001). Moutter notes that the technique is not new: before he came up with the technique and name, other tiers such as Ned Long and Bob Quigley used the same technique. There were two other names for this method: the Hackle Stacker and the Pullover.

One of the advantages of Paraloop flies is that there is no hackle below the hook shank, which is ideal for hookups. The other great benefit of the technique is the profile of the fly: because of the absence of hackle below the hook shank Paraloop flies sit low in or on the water. And that is a big plus, especially for emergers. The Paraloop technique is very versatile: you can use it on any heckled fly that you wish to turn into a low-riding fly.

My favorite emerger is the Peccary Paraloop Emerger. I use it on smaller, slower sections of trout and grayling streams in the hills of Germany and it has proven a very successful pattern. 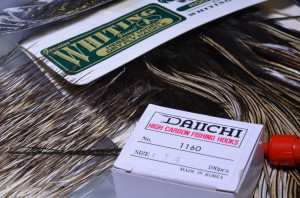 I use Whiting saddle hackle because this hackle has a thin and flexible, yet strong stem, which is a must-have for hackling around a small diameter parachute post used on paraloop hackles. The new Daiichi 1160 Klinkhammer hooks are a great choice for this emerger. They are light ( a heavy hook turns a low-riding fly into a diver), have the right shape for emergers and are wicked sharp.

Set up the thread to well into the bend. Tie in one Peccary hair (soak well before tying in). 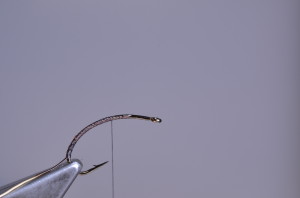 Wrap a neat body, tie off and cut. Tie in parachute post – only 10 or so strands of poly will do. Fat posts are horrible to tie down later on. 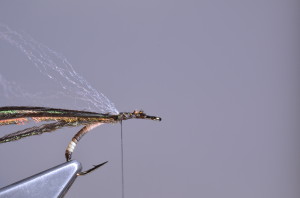 Tie in your hackle – this is a Hebert-Miner Speckled Badger saddle hackle. Speckled hackle is great for emergers because it suggests movement. Natural or dyed Grizzle hackle will also work of course. 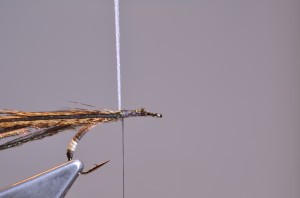 Twist the peacock and make one wrap behind and in front of the post. It’s best to do it now because you won’t be able to reach that area when the hackle is in place later on. 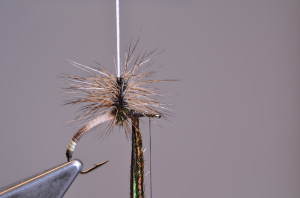 With the nail of your left hand (assuming right-handed tiers), push into the hackle to divide the barbs left and right. With your right hand thumb and index finger, pull the barbs back to clear the area in front of the post for the peacock. 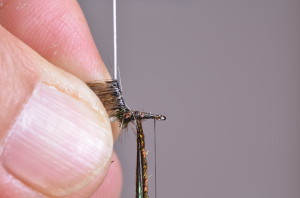 Twist the peacock and wrap a thorax with three of four wraps. Don’t crowd the eye. Make a few thread wraps just behind the eye as a thread base on which to tie down the post. 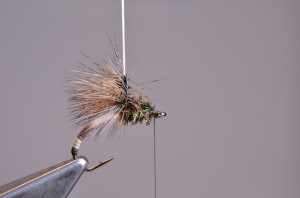 Pull the parachute over the thorax. If you pull the post tightly forward, the fly will sit higher on the water than when you leave a small space between the hackle and thorax. Tie the post down behind the hook eye. Avoid trapping any hackle barbs: use the post as a guide to slide your thread wraps in place. If you do so, the thread pressure alone will push back any stray hackle barbs. 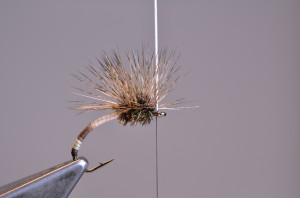 Dense, speckled hackle that to me suggests motion (Emerger). 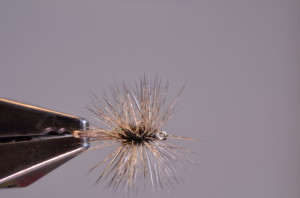