Wulff flies date back to 1929 but they still are great flies, or rather: style of fly. Heavily hackled or sparse, with a dubbed, floss or thread body, natural or bleached Elk… Wulffs are still going strong!

Lay a thread base on the hook shank and tie the Elk (20 hairs or so) on top of the hook. Tighten the thread by pulling up, not down or the hair may be pulled to the far side of the hook. 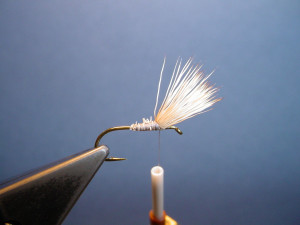 Divide the wing, make three thread wraps around the base of each wing to separate the wings. Make the thread wraps firm, not tight or the hair will flare. Tie in tail (10 Elk hairs or so) Make the first wraps tight then ease to firm as you make your last wraps. 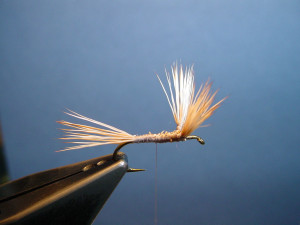 Tie in yellow thread behind the wing, twist the thread counterclockwise to flatten it. Wrap to tail and back up again. Tie in hackle, dull side up. Note the bare stem at tie-in point and thread slope to the eye. The bare stem will result in a nice first wrap of the hackle without any stray barbs; the thread slope is a gradual taper to the hook eye, which helps hackling. 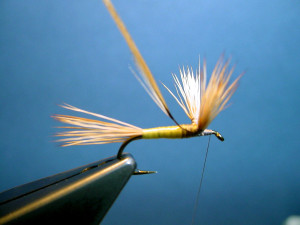 Wrap hackle (3x behind and 3x in front of wing, whip finish and varnish head.